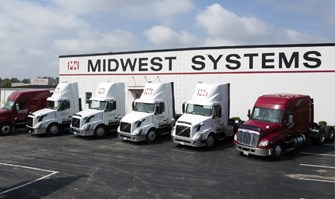 Our history begins during the year 1943 when Earl Winkle and his sister Georgia Turpin operated the business under the name Midwest Steel Company. The company operated as a steel wheel fabricator and a producer of castings for truck trailers. This included all types of trailers for the trucking industry, boating industry and railroad industry.

During the year 1951 Earl M Winkle re-incorporated the company in Missouri and began operating under the name Midwest Parts and Equipment Co., which better encompassed the company’s presence in many aspects of the transportation industry to include trailer sales and repair, steamship container and chassis storage and repair, rail drayage, and local and over the road trucking.

In 1972 the son-in-laws of Earl Winkle, Justin Williamson (President and Secretary) and Thomas Lynch (Vice-President and Treasurer) purchased both companies, River-Roads Distributing Co and Midwest Parts and Equipment Co.

In 1973 the companies relocated its business to 5911 Hall Street in St. Louis. This and the other adjacent properties owned by Justin and Tom sat on approximately 58 acres of property. Midwest Parts and Equipment Co and River-Roads Distributing Co. operated their business from 5911 Hall Street – which included a 14-bay trailer repair shop, mobile service trailer repair, intermodal container and chassis storage and repairs, drayage trucking, local and over the road deliveries. The adjoining terminals were leased to various companies.

In the year 1992 while the company was owned and operated by Justin Williamson and Tom Lynch, the Company began operating under the dba of Midwest Systems. The name Midwest Systems more broadly encompassed all of the transportation ventures of the business.

It was this same year, 1992, that Justin and Tom partnered up with Jim Rogers and created Midwest Systems Truck Equipment (MSTE). The company sells and install various heavy truck equipment such as bodies, snow plows, salt spreaders and lift gates. Once MSTE was on solid ground it was sold to Jim Rogers during the year 1999 and remains operational today.

In the year 2011, Midwest Parts and Equipment Co, dba Midwest Systems was sold to third-generation owners, sons of Justin and Tom. Steve Williamson and Michael Lynch purchased Midwest Systems from their fathers and remain the current owners today.

Steve and Mike continued to grow and expand the Company. In the year 2013 Midwest Systems Logistics LLC was created and operates today as a brokerage and logistics company. The company began its operations specializing in the repositioning of steamship boxes from region to region and has grown to encompass many aspects of the logistics world.

In the year 2016 Steve and Mike expanded the intermodal trucking aspect of the business when they created MWS Intermodal Services, LLC which operates as an owner operator division, providing drayage of intermodal containers and chassis.

In 2018 Midwest Systems celebrated its 75th anniversary. The company is proud to say that they are a third-generation, family owned, local St. Louis, Missouri company that has remained in continuous business throughout those 75 successful years. The company credits its success to anyone that has been a part of their past and their present, from family and friends, to employees, and vendors, to customers and shippers, railroads and steamship lines, and so many other business partners. It is the strong relationships and ties to the industry and the community that has made Midwest Systems what it is today. It is these same relationships as well as those we continue to build in the future that will keep us strong and productive into the next generation.

under the name Midwest Systems